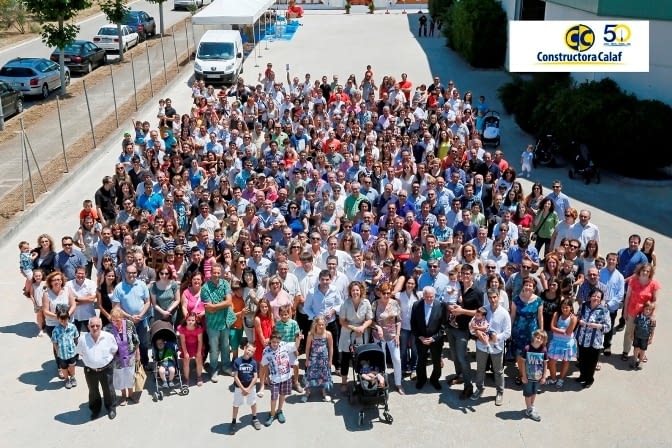 It's been half a century since that March 21, 1964, when Constructora Calaf -Calaf Trenching's mother company- was founded. Throughout these years the little builder who performed actions in their immediate area has become a business group of about 230 employees and it has initiated a process towards internationalization and diversification. The company wanted to celebrate the achievement of this milestone with all employees and their families. So on 28 June a party was held with some 500 people between current personnel -who are part of the workforce- and former retired employees with large experience within the company.

The day began with an open door day at the company's facilities. A tour was organized to visit the various departments and manufacturing sites, where operating machinery could be seen. Thereafter, a megaphoto with all attendees was taken, and finally a celebration cocktail was served for everyone.

During the event, a commemorative plaque was given to all employees who have completed 20 years in the business, and an acknowledgment was also handed to those who had received this plaque some 10 years ago, during the 40-years celebration.

The event ended with the traditional birthday cake, as well as the award ceremony of the 1st photograph competition, in which the different departments within Calaf Grup presented an original picture of their teams.